When performing UT inspections at elevated temperatures, it is critical to select the correct couplant, both for performance and safety.  Thickness gauging and corrosion mapping are often conducted at temperatures between 500°and 1000°F (260° and 538°C) where auto-ignition may occur.  Ultrasonic transducers and instruments capable of operating at temperatures up to 950°F (510°C) are routinely used, and development programs are targeting new designs with capabilities up to 1100°F (593°C).

Auto-ignition of ultrasound couplants has increased exponentially over the past decade due to higher temperature inspections, such as in heavy crude refining, and due to the extensive use of inspection ports.  The risk to inspectors and facilities, as well as the liability auto-ignitions impose can be reduced or eliminated by a few steps: 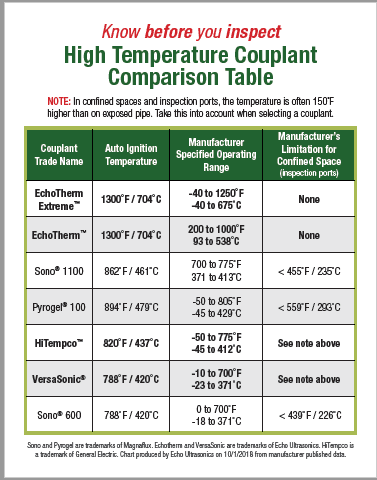 Elimination of auto-ignition of ultrasonic couplants is one of the lowest cost, highest benefit actions you can take to protect inspectors, facilities and to reduce liabilities.

Two couplants with broad operating ranges, but require attention to the temperature in confined spaces and ports as the temperature can be approximately 150°F higher than on exposed pipe.

Let us prove to you that Echo has a better high temperature couplant solution for safer, faster inspections. Request free samples today.