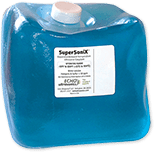 In May of 1940, Floyd Firestone, a Professor in the department of Physics at the University of Michigan, filed US patent 2280226 in which he described an instrument for the detection of flaws and measuring thickness in metal objects.  Dr. Firestone used the term “Supersonic Vibration Waves” to describe what we now refer to as pulse-echo Ultrasound Testing (UT).

Echo UltraSonics® new water-based gel couplant, SuperSoniX, is named in honor of Dr. Firestone and his work which gave rise to our world of UT.

SuperSoniX is our third-generation acrylic polymer water based couplant that improves on the electrolyte stability and reduces the tendency for the polymer to collapse when exposed to corrosion or marine salts.  In practice this means less reapplication of couplant during a test procedure, especially on objects that are exposed to the environment.

While many couplants will couple sound and perform adequately for the same inspection, often one will deliver performance that will make a significant improvement on inspection reproducibility and defect detection (the #1 goal of UT).  The right couplant can minimize couplant re-application during an inspection, reduce total time for the inspection and lower cost.  Let us recommend the most appropriate couplant for your application and temperature range.

Contact Marian (360) 671-9121 or ) for more information and free samples.  We have over 50 years of history developing and manufacturing most of the couplants in use yesterday and today and can help in selecting the best couplant for your specific application.